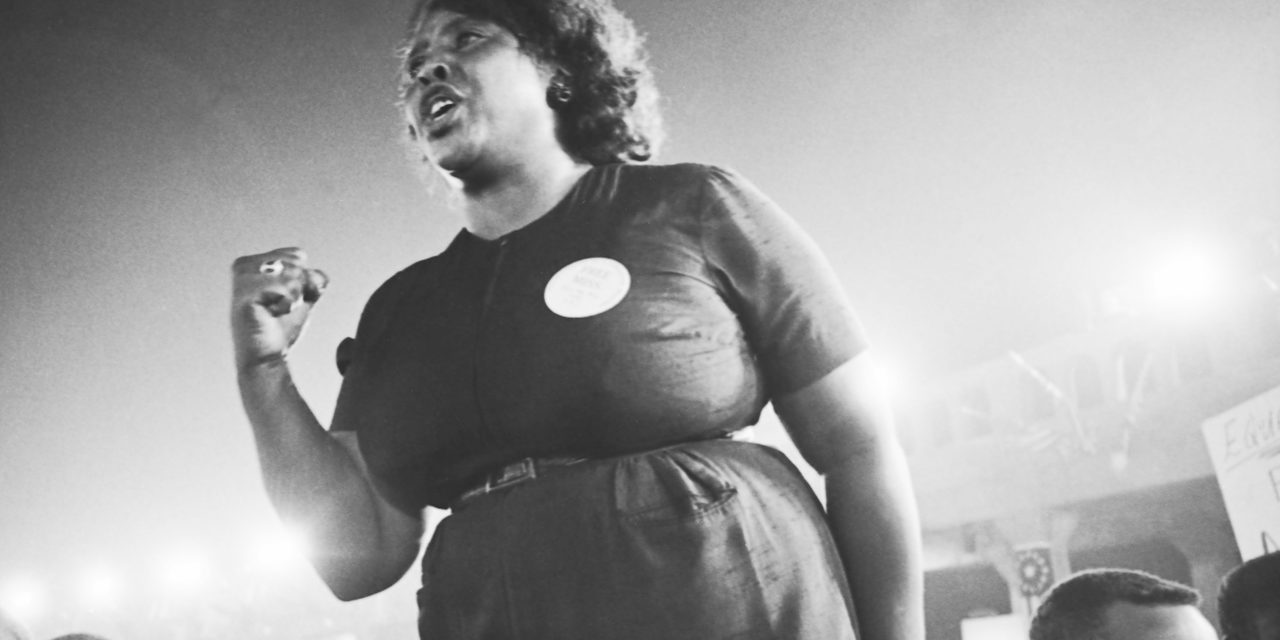 Fannie Lou Hamer was an activist who spoke out for black rights during Freedom Summer. 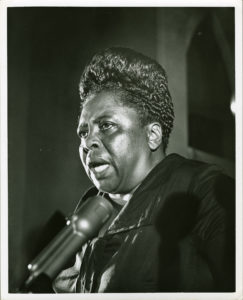 Although Fannie Lou Hamer has earned international reverence as an activist for voting rights, she was also an instrumental force in the push to gain economic freedom for the Black community through agricultural independence. Hamer stepped into the national political spotlight after becoming the leader of the Mississippi Democratic Freedom Party, which attempted to unseat the segregationist delegation at the 1964 Democratic National Convention.

The life and legacy of Fannie Lou Hamer encapsulates the complicated and troubled relationship between Black Southerners and the land on which they depended. Her grandmother, Liza Bramlett, was an enslaved Mississippi delta woman who gave birth to twenty-three children. Twenty of those children were the product of rape by white men. One of her three children that was not the result of rape, Lou Ella Townsend, was Hamer’s mother.

Hamer acquired a significant amount of knowledge regarding the skills needed to sustain oneself through land from her mother. During the Great Depression, Townsend scavenged picked over cotton fields, slaughtered pigs in exchange for pig parts, as well as tended a backyard garden and laundered clothes in exchange for milk and butter. During her youth, Hamer, barefoot and hungry, toiled daily in the cotton fields of the Mississippi delta. After becoming a mother herself, she found it extremely difficult to find the means to feed her own children. Later in 1963, while locked in a Winona, Mississippi jail, a state trooper along with two other inmates beat Hamer with blackjacks until the point of near blindness.

As the sixties drew nearer to a close, the civil rights movement began to focus on addressing the issue of economic injustice. Hamer envisioned a plan in which agricultural solutions such as communal farming and livestock sharing programs could be implemented in order to not only lift her fellow Americans out of their current state of financial woe but also sustain that improvement for generations to come.

Hamer believed that Black Southerners would never be seen as full citizens until they controlled their own diet as well as where the actual food came from. In 1969, with the assistance of Harry Belafonte and Measure For Measure, a charitable group based in Madison, Wisconsin, she purchased between forty and sixty acres of land and formed the Freedom Farm Corporation. The goal of Freedom Farm was to provide poor farmers with land while providing poor families with food to eat.

Feeling threatened by the possibility of losing their economic stranglehold over both the poor as well as Black farmers, conservative whites chose to strike back by calling in loans, firing black cooks and launching waves of terror by burning crosses during hooded night raids.

Neither deterred nor intimidated, Hamer aligned herself with Dorothy Height, the president of the National Council of Negro Women, and established a Pig Bank in 1969. The Pig Bank began with forty pigs (35 females and five males), and began giving pregnant females to Delta families that agreed to care for them. Once the pigs gave birth, the families retained the piglets then returned the mother to the Pig Farm to start the process all over again. By the Pig Bank’s second year in existence, over 100 families were able to slaughter pigs in the fall and freeze meat to store for the winter months. Hamer soon added a collective gardening project. She is quoted as remarking, “When you’ve got 400 quarts of greens and gumbo soup canned for the winter, nobody can push you around or tell you what to say or do.”

Although the Freedom Farm and the Pig Bank eventually faltered after Hamer’s health began to deteriorate, their establishment and initial success paved the way for further concepts of communal farms as well as began to erase economic gaps that lingered beneath the shadow created by generations of share cropping and the horrors of slavery. “Give a man some ground of his own and a hoe and he’ll never go hungry again,” Hamer said.

Sipp Culture’s primary mission is to ensure the both the stories and impact of agricultural heroes like Fannie Lou Hamer are never allowed to wither and be forgotten. The South is indelibly and eternally linked to the land of which it’s composed. Our history is rooted deep within the lush soil of the Delta as well as the rolling hills and thick woods. From this very soil emerges the food that is the staple of our culture. At a time when unhealthy fast food and genetically modified products have inundated the typical diets of average Americans, it is more important than ever to employ our cultural link to community farming to provide both access and information to every individual that can reap its benefits. “Land is the basis of all independence. Land is the basis of all freedom, justice, and equality,” Malcolm X.